In any view of Debussy’s style and the elements of his musical language the main problem is to define his attitude to tonality. The vagueness of Debussy’s sense of tonality, compared to that of Brahms, or even of Wagner, was long a commonplace in essays on musical analysis, and indeed in so far as this vagueness was held to be a characteristic of Impressionism from which, after Debussy’s death, there was a sharp reaction, it was held, too, to be a reprehensible aspect of his work, suggesting in his approach a certain tentativeness or a timidity. 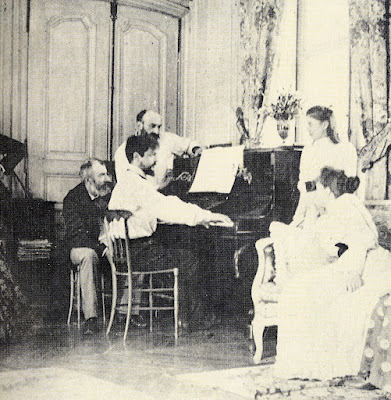 Today this view seems to us superficial. In the first place the short-lived reaction against Debussy’s work, which took place in the 1920s, now seems to have been less an Esthetic than a fashionable movement. Also, with our knowledge of some of the underlying origins of the great revolutionary movements at the end of the nineteenth century, we are compelled, in an assessment of Debussy’s style, to view values of precision and imprecision in artistic expression in a different light. Precision is not entirely virtuous; imprecision is not wholly to be condemned. The aesthetic proclaimed by Debussy required their fusion.
Inseparable from the conception of tonality was not only the theory of harmony based on the interplay of relative degrees of consonance and dissonance but also the musical forms in which this interplay was extended into a musical discourse, an abstract musical argument built on dissonant tensions prepared and resolved. In this view of music, accepted in the eighteenth century as a dogma, tonality was everything: an unassailable order prevailed, like the unquestioned social order of this period, allowing digressions of one kind or another provided that in the end these digressions served not a disrupting but a unifying purpose. This was the principle of the sonata form against which, in broad terms, the whole of the nineteenth century rebelled. But it was a slow, almost an imperceptible revolt with many charming explorations of lanes and by-paths on the way. By the end of the nineteenth century, even after Wagner, the underlying harmonic principles of the age of Mozart were still admitted; they had been tested in many different ways, amplified and adapted, but they had not been challenged. Moreover, the work of Debussy, as we see it today, achieved no more, harmonically, than was to be expected from any successor of Wagner. It broke down the rigidity of the tonal order a little more effectively, but the principles of tonality were not relinquished. The Preludes of Debussy, belonging to his later years, are still in certain keys and although, in the course of these short pieces, departures from the keys in which they are conceived are frequent and extremely remote, the pieces do just manage to begin and end in these keys. A step farther and the principles of tonality are completely undermined; there is then no going back, and the boundaries between consonance and dissonance disappear.
The distinctive achievement of Debussy was not so much his novel, ambiguous harmony; it was his recognition of the fact that since an advanced stage in harmonic development had been reached the older forms of music could not be maintained. The sophisticated design of the ternary sonata form, consisting of a thesis and antithesis, development and recapitulation, could not be built out of harmonic elements that were lush and almost over-ripe. Thematic or harmonic development, in the form of a musical argument ruthlessly pursued, demands a firmer, less ambiguous harmonic structure, and it was no doubt for this reason that Debussy particularly distrusted musical development as a method of composition. As opposed to the impact of isolated, sensuous chords, varied in intensity, or of fragmentary themes pursued in improvisatory fashion, thematic development in the works of Mozart, Beethoven, and Wagner appeared to Debussy to be based on a mechanical procedure, a mere formula – or at least he said so. It was of course based on nothing of the sort; it was simply that organic development of this kind formed part of an entirely different philosophy. It came about, however, that an organic development of themes was brilliantly used by Debussy in several of his larger works (La Mer, second movement; Pelleas, the scene with Yniold; and Rondes de Printemps). Debussy was not exactly contradicting himself here. As often happens at critical periods in artistic development, theories were in advance of practice. Debussy was logically sound in condemning the classical forms once the validity of tonality had been challenged, but in his larger works he had not yet found the new forms demanded.